NATIVE AMERICAN'S "RETREAT FROM THE HEAT" 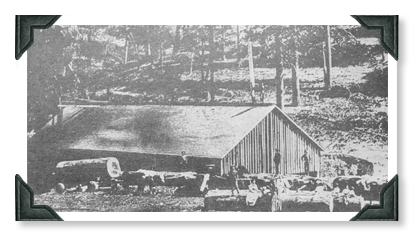 The Serrano Native Americans used this place as their "Makuala", which means mountain home. A few artifacts, such as an obsidian skinning knife have been unearthed by Outdoor Education students and Alpine staff. There is no known history before this.  In the mid-1800's, sawmills started popping up all over the mountain. Clipper Sawmill was set up right where the current Redwood lodge is located.
​
By the early 1900's, the tourists started to arrive on the mountain! In 1930, the Arrowhead Alpine Club was built. It was a plush resort that attracted the rich and famous from Los Angeles. The complex consisted of a large lodge with a central lounge, a dining hall on the south end and a cafe/bar at the north end (the current Redwood Dining/Lodge and The Branch). On the hill above were six cabins for guests, which are still in use today. Later, a pool and pool house were built.

During this period many Hollywood stars were among the guests. A leather bound guest book documents visits from Fred Astaire, Bette Davis, Shirley Temple and Mr. Black, Clark Gable, Joan Crawford, Lana Turner, Jane Russell, June Lockhart, Richard B. Harrington, Betty Grable James and others. The dates of these visitors range from 1944 to 1950. The business failed in 1956 due to liquor license violations and threats from governmental agencies to close the club. 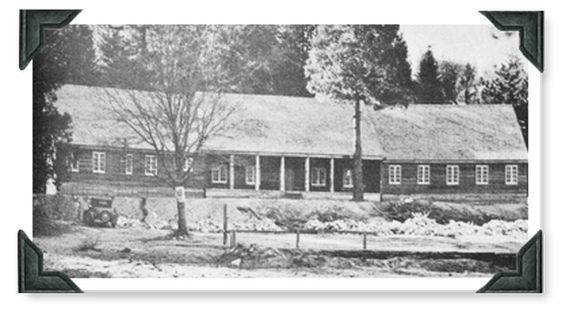 In the same year that the club failed, the Evangelical Covenant Churches of Southern California were seeking a campsite of their own. In February of 1957, some Covenanters were at a retreat in Twin Peaks when a realtor was also there. He was supposed to meet another party to show them the Arrowhead Alpine Club which was now up for sale. When the original party did not show up, the realtor took Bob and Dorothy Lundberg and Dan Seagren to see the facility. They liked what they saw. They needed a deposit in three days so Dan Seagren even got a loan on his VW to help raise the required $8000 deposit. The down payment on the buildings and adjoining 25 acres of land was $39,000. When the proposed Covenant camp was presented to the churches, all 13 voted to proceed with the purchase.
An open house for the churches was held on March 9, 1957. The plans were approved and escrow opened on April 1, 1957. The new name became the Alpine Covenant Conference Center.
In the spring of 1963 Doris Bowers was hired by the Long Beach School District to teach in their Outdoor Education program. She was assigned to teach at Alpine and that was the beginning of a long history of Outdoor Education at Alpine.
​Today, Alpine offers a variety of program camps (e.g. Summer and Winter Camps, Men's and Women's Retreats, etc.), a spirited Outdoor Education curriculum and Custom Retreats. These offerings have blessed hundreds of thousands of people both directly and indirectly, from the beaches of southern California to international shores on several continents. Come visit Alpine and see for yourself what they've discovered... and, perhaps, become part of that legacy yourself!

For a free copy of our history, Alpine Camp and Conference Center and we'd gladly give you one.
If you have an Alpine story, we'd be thrilled to hear it! Call us at: (800) 350-6289